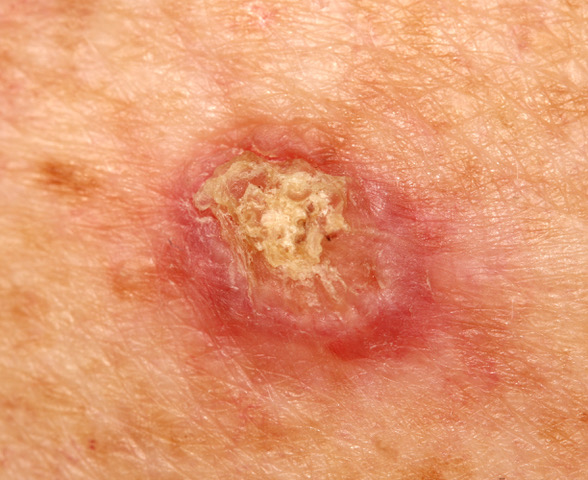 BCC or Basal Cell Carcinoma is the most common form of skin cancer. BCC almost always never spreads beyond the original tumour site, and the cure rate after a surgical excision is above 95 percent in most body areas.

So, is this form of cancer even something to worry about?

Even though BCCs are locally invasive and don’t spread to lymph nodes or blood stream usually, there can be some aggressive forms of BCCs which rarely can metastasise. In addition, BCCs in areas like lips, ears, nose and eyelids can create a lot of tissue destruction if not removed early. As they are very slow growing, patients take them very casually sometimes and by the time they start to bleed and ulcerate, they can be hard to remove and usually need a skin graft or a skin flap repair in the areas of nose, ears and eyelids. BCCs over the lower part of the nose or in the ears can go deeper into the cartilage if left unattended, making surgery difficult. Once you’ve been diagnosed with a BCC, it’s very likely that you will develop more over the years, leading to continuous treatment and possibly even disfiguration.

SCC or Squamous Cell Carcinomas are the second commonest type of skin cancers. They can be quite aggressive at times. While the majority of SCCs can be successfully treated, if left to grow, this common skin cancer can become very invasive, can penetrate deeper layers of skin and spread to surrounding lymph nodes and to other parts of the body.

The pre-cancerous lesions for SCCs (Actinic Keratosis or Bowen’s disease) can grow over a few years before they turn into invasive Squamous cell carcinoma.

Actinic keratosis is the most common precancerous lesion that forms on skin damaged by chronic exposure to ultraviolet rays from the sun and/or indoor tanning. Actinic keratosis results from long-term exposure to ultraviolet radiation. Actinic keratosis often appears as small dry, scaly or crusty patches of skin. They may be red, light or dark tan, white, pink, flesh-toned or a combination of colours and are sometimes raised. Because of their rough texture, actinic keratoses are often easier to feel than see. The lesions frequently arise on sun-exposed areas of the face, lips, ears, scalp, shoulders, neck and the back of the hands and forearms.

Catching and treating the actinic keratosis before it becomes an SCC can make a huge difference in your treatment experience. You want to get them early, before they go invasive, mostly to prevent possible invasion into the skin and internal organs. This is especially important in the head and neck region, as those cancers can be more aggressive in these areas. You’re also going to get less scarring than if you waited to remove a growth until it was cancerous.

Only about 10 percent of actinic keratoses will eventually become cancerous, but the majority of SCCs do begin as actinic keratosis. Unfortunately, there’s no way to tell which actinic keratosis will become dangerous, so monitoring and treating any that crop up is the only way to be sure.

They vary widely. They could be thick, red, scaly patches or they could be red bumps with a tan crust or could present with a raised little horn-shaped part, called a cutaneous horn. Pay attention to anything that keeps coming back or doesn’t heal, just as you would while examining your skin for signs of fully formed skin cancers. I tell my patients that if they have any concerning areas like that, to call the clinic and we will see them as soon as possible. That way we can treat them early and prevent formation of squamous cell carcinoma

Actinic keratosis can be treated easily with simple procedures like cryotherapy or with some cancer burning creams, laser ablation or with curettage and desiccation.

Actinic keratosis on lips is called Actinic Cheilitis. You might think you have severely chapped lips, but that could be a warning sign of actinic cheilitis. This precancerous condition typically appears on the lower lip as scaly patches or roughness. Left untreated, it can evolve into a Squamous Cell Carcinoma of the Lip which can be very aggressive.

The SCCs can also present as a wart-like growth or a cutaneous horn. You might think you’ve developed a wart, but these funnel-shaped growths that look like a tiny horn on the skin may have a SCC in the base.

A superficial form of SCC is called Bowen’s disease or Squamous Cell Carcinoma – in – situ. You might think you have a patch of dry skin. But if the patch doesn’t heal, looks scaly, red or crusty and starts spreading outward, it could be a superficial type of SCC called SCC in situ. At this stage, it is not dangerous and the treatment is easy, but if left untreated, it can progress and turn into an invasive SCC which will need a full excision and will leave a much bigger scar.

It can be difficult to comprehend just how big a difference early detection makes with melanoma, the most dangerous form of skin cancer. Treating a Melanoma early rather than after it is allowed to progress could be lifesaving.

To fully comprehend the significance of timing, it can be helpful to understand exactly what happens to a melanoma when it advances to a later stage, and what it means when a melanoma spreads beyond the original tumour site.

Every melanoma has the potential to become deadly, but the difference between a melanoma-in-situ and one that has begun to metastasise cannot be overstated. There is a drastic change in the survival rate for the various stages of melanoma, highlighting the importance of detecting and treating melanomas before they have a chance to progress. It’s impossible to predict exactly how fast a melanoma will move from stage to stage, so you should be taking action as soon as possible.

There are different types of melanoma

If you need help with skin cancer treatment in Newcastle, Hunter Valley then book an appointment with Elixir @ Hunter.

previousHow to get rid of wrinkles permanently?